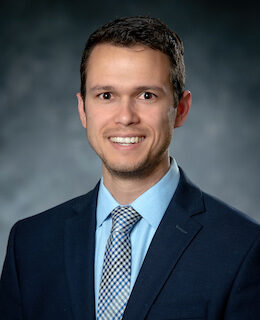 Get to Know Dr. Barfell

Dr. Barfell joins Cincinnati Eye Institute as a Cataract and Refractive Surgeon specializing in Laser Vision Correction. He completed his undergraduate degree at Cedarville University and received the prestigious President’s Trophy for the 2011 graduating class, awarded to one male and one female student who demonstrated leadership, campus involvement, and academic achievement. He then attended the University of Cincinnati College of Medicine where he participated in research involving prosthetic corneal transplants, sparking his interest in Ophthalmology. He graduated in the top quartile of his class.

Dr. Barfell completed an internship at The Jewish Hospital, followed by residency at the University of Cincinnati Medical Center. While there, he performed hundreds of cataract surgeries, intravitreal injections to treat macular degeneration, various laser procedures to treat glaucoma and retinal diseases and has managed numerous ophthalmologic emergencies. In addition, he served as a rotating Chief Resident, and participated in several international medical mission trips to Honduras and El Salvador with the International Association of Lions Clubs. He was awarded the Alan and Karen Zalta Resident Research Award during his Chief year of residency for his work with corneal transplant outcomes in elderly patients.

In his free time, Andrew enjoys spending time with his wife, and daughter and their excitable pup, Lily. He is an avid cyclist and coffee roaster.